Coming on the heels of Target's arrival in the East Village, and even more recently, on the LES, here comes Marshalls to help transform the area into an unrecognizable version of its former self. According to EV Grieve, big box discounter Marshalls will be opening in September "in Ben Shaoul's luxury condoplex on East Houston Street" (between Ludlow and Orchard streets), right next to the iconic Katz's Deli. What a sight that will be.

Earlier this summer, Target opened in the East Village and announced itself by propping up a faux CBGB awning as a nod to the neighborhood's past, which went over extremely well with locals. It's unclear how Marshalls will trumpet its announcement upon opening—repurposing the faux CBGB awning? Setting Mercury Lounge on fire? They have a month to nail down the details. EV Grieve notes that "this location — the seventh in Manhattan — opens on Sept. 27." 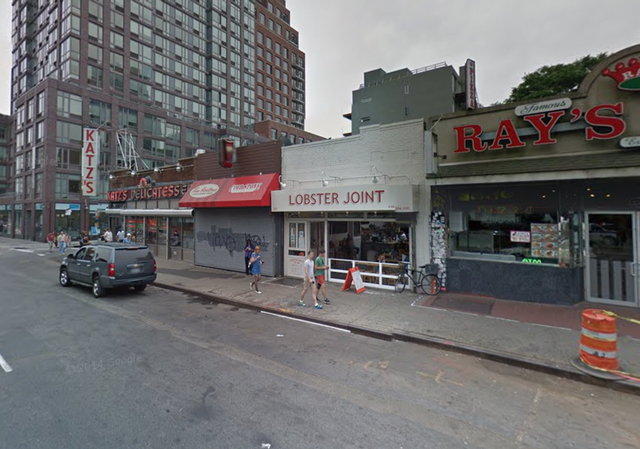 Listen, Marshalls is a great spot to get brand names for cheap and/or things for your home that you don't even need but there they are right in front of you and you can't beat that price! But Marshalls belongs in a suburban strip mall, next to TJ Maxx, which is exactly the same store but with a different name (and was originally slated for this location, in fact). Or Williamsburg, put the Marshalls in Williamsburg, that's where we're putting all this crap now, developers.

As for the 94 luxury condos above the store, 196 Orchard Street's website currently offers one bedrooms starting at $1.425 million and a three bedroom for $6.5 million.

And with that, East Houston's transformation into a suburban strip mall continues. Could still use a HomeGoods or Dave & Buster's though, that'd really tie the neighborhood together.