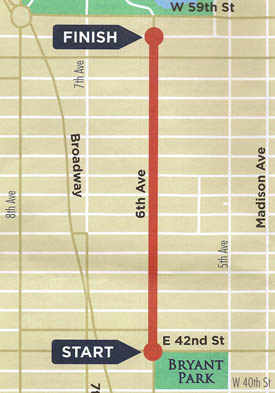 Major League Baseball's All-Star festivities are in full swing, finally culminating in tonight's game at Yankee Stadium. But before the National and American Leagues face off in the mid-summer classic, baseball's All-Stars will be parading up 6th Avenue in the Red Carpet Parade. Starting at 1pm, players in tonight's game and over 40 Hall of Fame members will make their way from Bryant Park (40th and 6th) north to 58th and 6th.

MLB says the best view will be at Rockerfeller Center (6th ave at 47th), but we would imagine views would be pretty good along the whole 18 block route. They'll be handing out free stuff including trading cards, antenna toppers, fuzzy team dice (!!!), and Mardi Gras beads (get Derek Jeter to expose his chest). Some of 49 Hall of Fame players scheduled to appear include: Yogi Berra, Whitey Ford, Goose Gossage and Reggie Jackson.

And while the color of the carpet may be red, the carpet used in today's event is 'green'. The 18-block, 95,000 square-foot carpet, was made with 100% recycled fiber content. On the contrary, the parade of vehicles carrying people on the carpet, not so green.

All-Star Game Red Carpet Parade, today from 1pm-3pm on 6th Avenue from 40th St to 58th St.--and there are plenty of street closures to go along with that