Luke Danes Is The Worst Gilmore Guy, Yeah I Said It

If you've watched Gilmore Girls (which may be getting new episodes on Netflix soon) , then you probably like Luke Danes. He added a little bit of surliness to the saccharine Stars Hollow, a little slow-it-down attitude to balance out the fast-talking Rory and Lorelai. He hated cell phones, but always had coffee. In retrospect, Luke was really only good for having the coffee.

The first time you meet Luke it's not even one minute into the pilot, and he's giving Lorelai a hard time about her caffeine addiction—"How many cups have you had this morning? You have a problem... junkie." This would set the tone for their interactions throughout the next 7 seasons, no matter where the dial landed on their relationship spectrum. 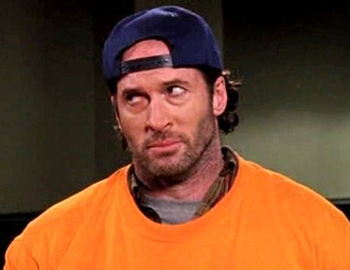 Luke has universally been a favorite Gilmore Guy. Maybe it's the flannel. The two-day-old facial hair. The backwards baseball hat. Maybe you think you can make Luke happy, and fix him, and get him to leave the diner just once. Maybe his disdain for technology and talking and other people draws you in, because you're tired of it all, too. But listen, at best, Luke would just tolerate you.

Luke made his way through the show forming relationships based on whether or not he could tolerate the other human in front of him. He tolerated Lorelai the most, so he thought he loved her. When just being tolerated wasn't enough for Lorelai, he acted out through tantrums.

In season 4, when Luke neglects to tell his good friend Lorelai that he moved out of town, she calls him on it, confused why he wouldn't have shared this information. In response, Luke shows up outside of Lorelai's work, unannounced, and throws a tantrum, yelling:

"You think everything is your business. EVERYTHING IS ABOUT YOU. Well here's a newsflash, some things aren't about you. I DON'T HAVE TO TELL YOU ANYTHING. And you don't have the right to make me feel guilty because I didn't tell you anything. I have been tying my own shoes since I was 4, I have been making my own decisions since I was born, I owe you NOTHING. NOTHING." 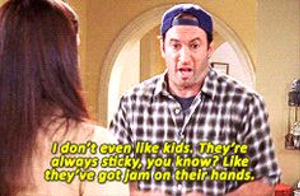 Remember, this was Luke's reaction to Lorelai, his friend of many years, wondering why he didn't tell her he moved out of town. Totally normal.

You see, Luke is a rebel, Dottie, a loner. At one point he even explains this. Here is what he tells Lorelai (the only person he even speaks more than a few sentences to during the entire series) regarding moving in with his girlfriend (Rachel):

Listen, here is why you, and Buzzfeed, think Luke is perfect. You will fall into either Category 1 or Category 2 here.

1. You watched the show when it originally aired. There was no streaming back then, you watched the episodes week to week over 7 years. This kind of slow pace allowed you to elevate Luke, who you probably just saw as the traditional and somewhat mysterious good looking fella behind the counter, whose heart so clearly pined for Lorelai. He really didn't even get that much screen time, so you likely filled in a lot of his storyline and personality with your imagination.

2. You are BLIND. All you see are the 10 times out of all the times where he's been an over-the-top, sensitive-but-rugged dream man who builds you a goddamn ice skating rink in your front yard because you love winter so much. But that is not every day Luke, that is not every once-a-month Luke, it's 10 times out of 7 years Luke. Watch every single episode back-to-back and, just like when you stare at one of those Magic Eye posters, you'll see the real Luke appear.

[Editor's note: In a perfect, more accurate world, this take would be headlined "Luke Danes Is The Worst Gilmore Guy Except For Logan Huntzberger" but the author appears to have some sort of twisted crush on Logan, the handsome yet affluent villain of the series. Here is our exchange, for the record:

John: Do you mention logan here? bc if you're calling Luke the worst you need a sentence at least explaining why he's...
Jen: no logan is the best
John: JEN
Jen: i never said i had good judgment when it comes to men but i really do like logan!
John: oh man
Jen: what is wrong with logan?
John: he's an entitled prince who glides through life on the strength of his family connections and his insufferable smirk, treating Rory like his prop and protege instead of his equal. He's a raging alcoholic and a spoiled brat. He calls Rory ACE? Every time he says that I carve another skull on my forearm with Logan's name underneath
Jen: but they challenged each other! he supported her career goals! and he didn't ASK to be born into a privileged family. it's as much a burden as it is something that allowed him to get that sweet loft.
John: yeah poor Logan
Jen: i like when he calls her Ace
John: And I'm done talking to you
Jen: aight ace]