Look Back At 1979 NYC Through This Tourist's Old Photos

Recently, some vivid old photos of NYC were rediscovered online, and we reached out to the photographer, who goes simply by Terry from Sydney, to get the backstory. Back in the late 1970s, Terry was in his 20s and exploring the world away from his home in Australia: "I had come from Canberra in Australia which was and still is a low rise city," he told us, "I was very impressed with the skyscraper skyline of the city." He continued:

I thought the city was vibrant and full of energy. I noticed that pedestrians walked faster than I was used to. There seemed to be an unwritten rule not to make eye contact or speak to strangers, especially in the subway. I broke this rule twice while trying to ask for directions. Each time, I got as far as saying "Excuse me" before the person jumped back from me. However, they were helpful when they found I was just a lost foreigner, not a mugger. I felt a bit like a hick from the sticks.

I was shocked at the state of disrepair in Harlem. The streets had big potholes. There were many burned out buildings. Some lots had no building, just piles of rubble. However, overall, I felt that New York was an exciting city. 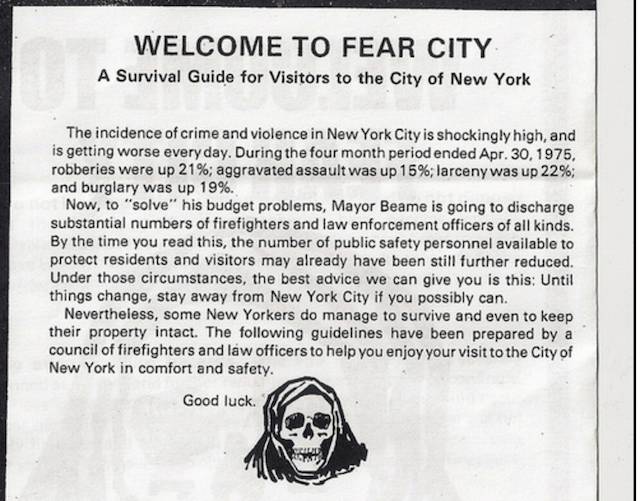 At the time, the Council for Public Safety (police, firefighters and other unions) published and distributed a scaremongering pamphlet called "Welcome to Fear City: A Survival Guide for Visitors to the City of New York." It warned tourists to "stay off the streets after 6 p.m." and to "never ride the subway for any reason whatsoever," but Terry (who was here for three weeks in 1979) did both.

He hasn't visited since, but tells us, "I would like to return to see how the city is... I see on Google that the streets I photographed look very different. I wonder what the mood of the people is now?"

He added, "I think New York is the best city in the USA."