Last night I wrapped my blanket around me and pretended I was a human burrito, and then my radiator started spewing black water. All of this means cold weather IS HERE, BABY, bringing with it the promise of dark days and sleet and ice skating season. Yes, it was just June. No, you cannot return that very #OnTrend one piece you bought but only wore once because it rained every Saturday this summer. The world is very unfair, I know.

Though it will be 70 degrees for the rest of the week, The Rink at Rockefeller Center is already open for the season, and a $25-$32 entrance fee (and $12 skate rental) will transport you into Winter. Wollman Rink in Central Park opens next Monday, October 23rd, and Lasker Rink, also in Central Park, will launch its skating season sometime in late October, "weather permitted," which probably means it won't open until real winter starts sometime next April. The Rink at Bank of America Winter Village in Bryant Park will open on Saturday, October 28th, alongside its food stalls and holiday shops. The Prospect Park ice skating rink opens the following day, on October 29th.

SOON, WE WILL NEED MITTENS.

AND PROBABLY SOME BOOGIE BOARDS... 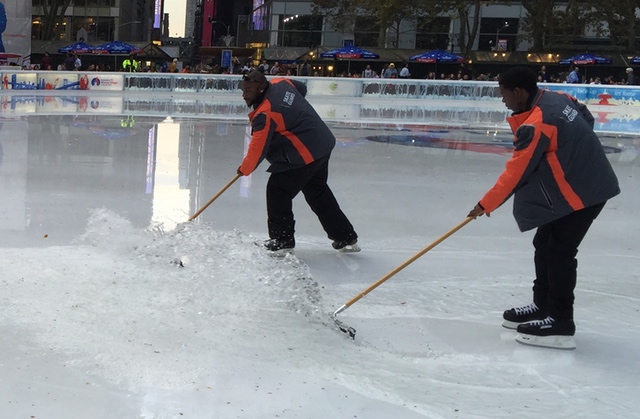 Anyway, here's a list of all the possible injuries one might sustain at a skating rink, in case you're curious.