Inside The Sherry-Netherland, The Most Whimsical Old Hotel In NYC

Of all the iconic hotels in New York City, the Sherry-Netherland may be the least talked about. It's not quite the symbol of Manhattan wealth that The (tainted-by-Trump) Plaza is used for in movies; it's not an old money monstrosity looming over Park Avenue like the Waldorf-Astoria; it wasn't built on the bank account of John Jacob Astor like The St. Regis; and no literary minds ever made it their clubhouse like at the Algonquin. When it comes to iconic New York hotels, somehow the Sherry-Netherland gets overlooked, despite being one of the most iconic in town.

I first took real notice of the hotel when I had a root canal a few years ago—the oral surgeon I was sent to on the Upper East Side was just down the block, and on my walk back to the subway I glided over the entryway and saw that old clock appear on the other side of the awning: The Sherry-Netherland. It sounded familiar. I soon realized this was because I had seen it on Mad Men. (In the show, Don Draper logs some time there with Sylvia Rosen, and it's also where Roger Sterling proposed to Jane.) 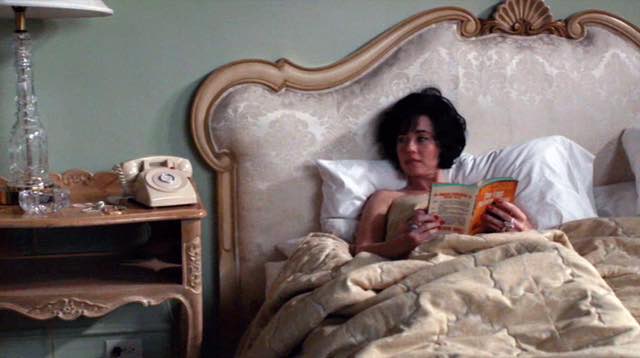 I really love hotels—from roadside Red Roof Inns in Nowheresville, USA to the grand old New York City hotels—so I decided to book a room there one night earlier this year (disclosure: they ended up giving me a media rate after I contacted them asking if I could speak with someone while there for a story). A few months later, my friends booked me a suite for my birthday, knowing how much I enjoyed the first stay. So I've had two experiences there, and can say the hotel is as whimsical as the name implies, and completely worth it if you have $500 to $1700 to spend on a night there, give or take a few hundred. It ain't cheap, but if you can splurge you won't be disappointed in the experience. (Tip: If you can really splurge ask for suite 2309. Like all of the City Suites, this one comes with a kitchen, living room, bedroom, bath, and killer view.) 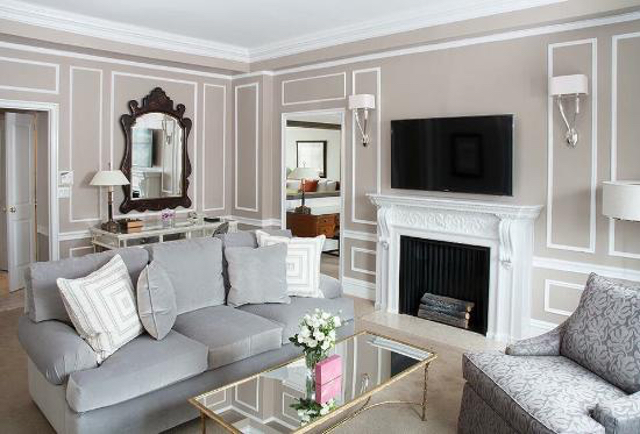 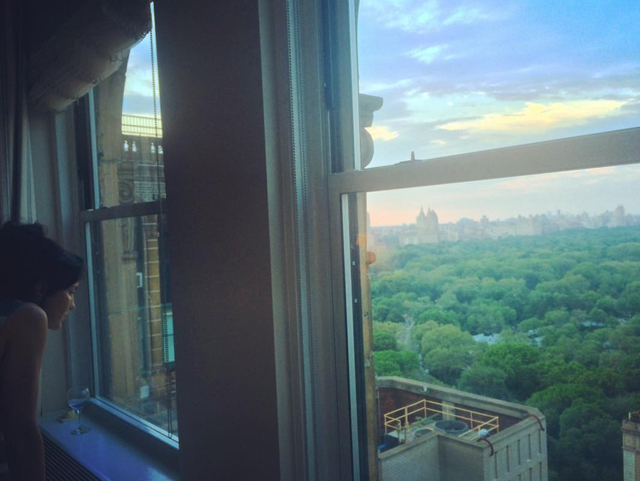 The view from Suite 2309. (Jen Carlson/Gothamist)

The narrow lobby—a humble showpiece for the hotel when compared to the Plaza's grandiose entrance—is filled with old school charm. It's gorgeous, but not meant to be showy, which seems to have suited many guests there over the decades—the Sherry, as it's called, is known for being discreet. (It's possible this is why no one would speak with me at length for this story.) There are hushed tones of welcoming, not a rowdy bar scene at the center of it all (though Harry Cipriani is their official restaurant, located next door). And you won't find clusters of tourists dragging their suitcases around and taking photos; instead, you may find a resident returning with his evening ice cream cone (an almost too-perfect scene I ran into in the elevator one night). 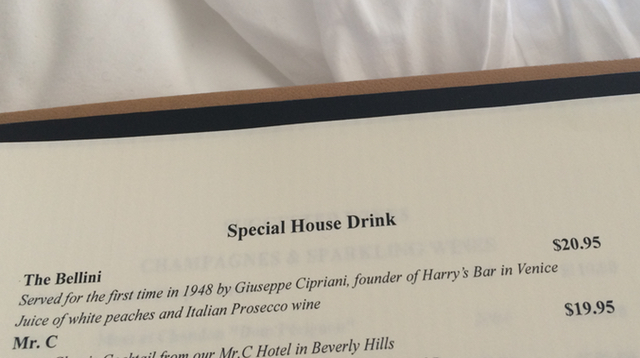 Everyone says the Bellini is amazing but I wasn't going to spend $21 to drink one in bed alone even though I reallllly wanted to. (Jen Carlson/Gothamist)

The front desk concierge, the elevator operators, and everyone who works there, will treat you like you're a special guest. And they've seen some actual special guests...

Diana Ross, Barbra Streisand, George Burns, Jack Warner and Francis Ford Coppola have all lived there. Not to mention: David Bowie. Upon his death, the NY Times recalled: "Like a lot of rock stars, Mr. Bowie lived in hotels: first the Gramercy Park Hotel, then the Sherry-Netherland until the room-service bill became obscene." This was in 1974, when Bowie lived in a "lavish" suite for a year, and allegedly even Mick Jagger was worried about the amount of cocaine he was doing during his time there.

The Sherry turns up in a lot of books about Bowie—in one, guitarist Keith Christmas recalls being beckoned there: "[A chauffeur] took me to the Sherry-Netherland, where David was holding court surrounded by freaks, weirdos... it was straight out of Fellini. David Cassidy was sitting on a chair outside." Indeed, in David Cassidy's own memoir he recalled, "It was like a carnival at his place. There were some people in other rooms doing mime. He had a whole bunch of people around him who, I guess, made life interesting for him."

This was all in the 1970s, which was more of a rock n' roll era for the hotel (and also just... for America), when their private club was filled with more adults than tweens, when Rolling Stone's Jann Wenner was dining at their restaurant on a regular basis, and interviews for his magazine were held in suites:

Elton John at my favorite NYC hotel, the Sherry-Netherland, 1976. Taken during an interview with Cliff Jahr for Rolling Stone. pic.twitter.com/SiYirj77Tj

Before the rock stars came, Natalie Wood, and Marilyn Monroe, Joan Crawford were amongst the Hollywood starlets to enter the hotel. But long before any of these names, there was Louis Sherry, confectioner. Or was there?

Sherry's name is on the hotel, but he didn't really have much to do with it, no matter what the inside of that chocolate box tells you (see below)—he died in 1926, a year before the hotel opened in 1927. Here's what happened: "The 'old' Netherland Hotel, originally built around 1892 for William Waldorf Astor, was acquired in 1924 by Frederick Brown, 'an operator, [to] be remodeled into stores and apartments.' It was not until March 1927 that the almost-complete 'new' Netherland was acquired by Louis Sherry Inc. (through a subsidiary called The Sherry-Netherland Company)" which was headed by Lucius Boomer. Here's what I did learn from the hotel, "Mr. Sherry wanted his name on the building, but he realized that incorporating the old name would help to immediately establish the importance of his elegant establishment."

When you enter your room these days, you'll find a tin box of Sherry's chocolates on the table waiting for you. 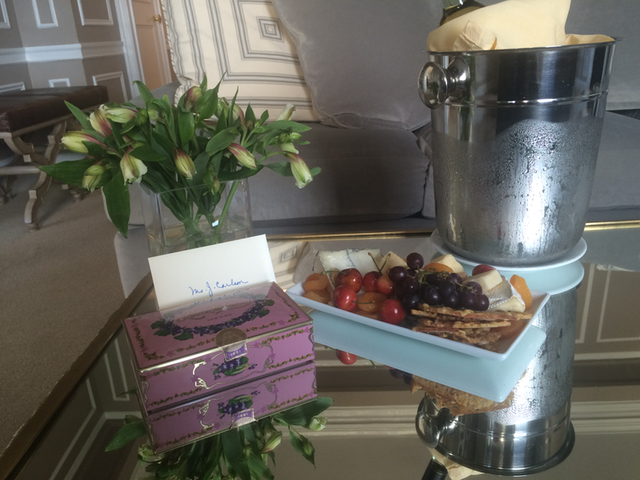 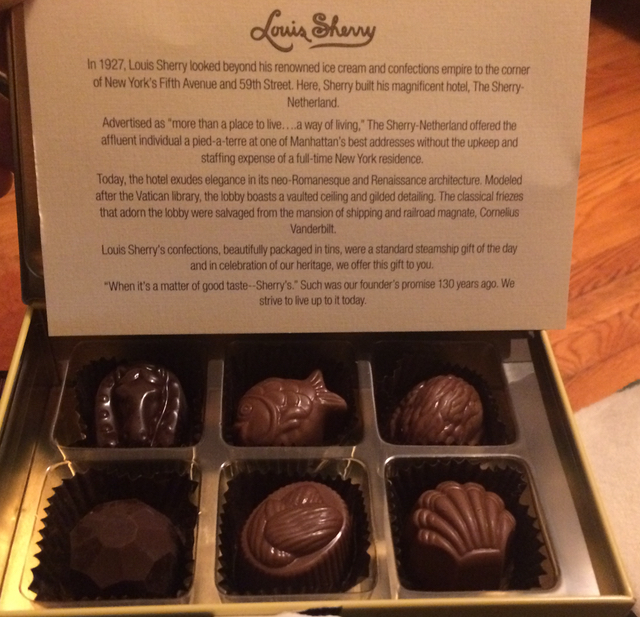 A little bit of fiction inside the chocolate box. (Jen Carlson/Gothamist)

Some historic facts about the iconic hotel:

The New York Times' photo of the Sherry-Netherland fire is damn dramatic: pic.twitter.com/NnI0Msj6T4

The Sherry-Netherland is located at 781 Fifth Avenue (part of the Upper East Side Historic District), and the 38-story building hasn't changed much since it opened. Currently there are 165 apartments that were converted to co-ops in 1954, and 50 hotel rooms and suites. (Want to live there? It will cost you anywhere from $675K to many many millions of dollars, but you'll get some perks like Cipriani room service, a fitness center, a beauty salon, daily housekeeping, and more.) 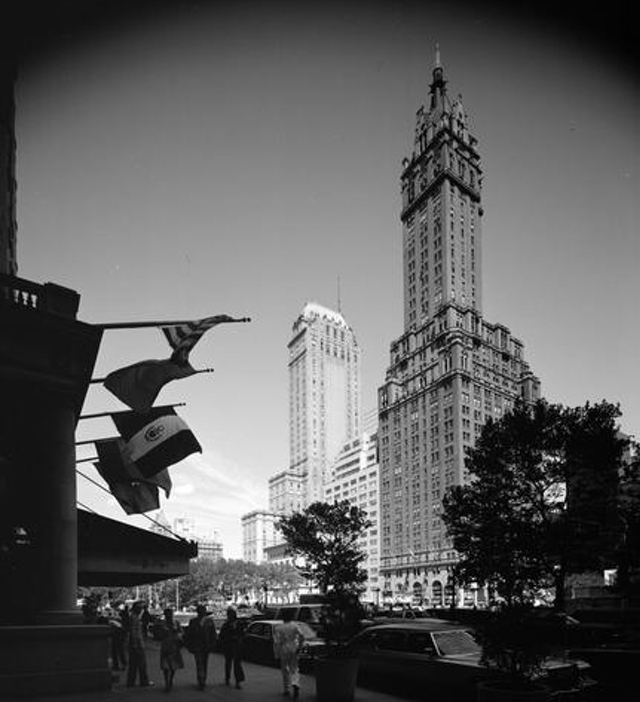