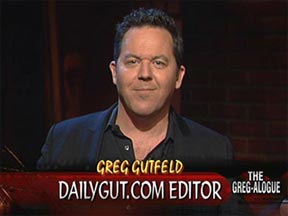 Greg Gutfeld is a funny guy. The only problem is that his show, Red Eye with Greg Gutfeld is on at 2 AM on Fox News. But that's not his problem; it's yours-- because you don't get to watch his show. You miss out on fun guests like Dennis Kucinich, Harland Williams, and Johnny Rotten providing rapid-fire commentary on the day's events. But just because it's on at 2 AM and on Fox News isn't stopping it from getting positive reviews from the The New York Times and The Guardian .

How would you describe the transition from writer and editor to on-air talent and what did you find to be the most difficult aspect of said transition?
First, it's just getting used to being in front of camera. I was always behind the camera - in a van, or a panel truck, which is the most unobtrusive vehicle I found for taking pictures. But that's what makes Red Eye the greatest show on television right now. We are unencumbered by experience and competence. It's like being thrown into the deep end of the pool. And the pool is actually a thresher. But this strategy worked. It took three months to work out the kinks, but our show is now the most refreshing, smart and fun hour on television, and that includes Reading Rainbow. More juice? It's grape.

Having done this for over half a year, what are some tricks that you've picked up to make it through the day and in what way have you improved
I finally learned how to use a teleprompter. I take vitamins. But the most important element to the show is the refusal to play along with the "litmus" guests - the person who comes on to spout party lines, be they left or right. The best part is watching a lefty coming on to rag on "faux news," only to realize we don't care. Making fun of Fox or Bush is the least daring thing you can do in the world. I apologize for the heat in my apartment. The air con is down. Take off your jacket. Oh...relax! I bet I can guess your weight.

I'd read that before hosting Redeye, you were working on a book. What's the status of that book now and what was it about?
The book, to be published by Simon and Schuster, is coming out end of January, 2008, and in it, I attempt to explain the meaning of happiness through random discoveries I make about life while living in London from 2004 to 2006. It's called "Lessons From the Land of Pork Scratchings," and if it doesn't change your life, then you're already dead. Would you like me to read some excerpts to you? Oh sorry about that! I'm such a klutz! Let me get that juice stain out of your jeans. I'll rinse it with salt and water.

You're also a former student body president. What are some tips that you can offer to all the young people campaigning today?
It was an 8th grade class, so I told everyone I knew karate. If I were a young person campaigning today, I would probably start a blog. Those are very popular among the youth today - but it requires internet access, and that's something "the man" might not want you to have. So I would stick to telling people you know karate.

Did your sense of humor often get you into or out of trouble growing up?
What got me into trouble were the experiments. For the longest time everyone thought it was the work of a raccoon. Hey, you've got to see the view from the balcony. Just through my bedroom over here.

You draw frequently and have a love of Mad magazine. Have these two loves ever crossed paths in a Greg Gutfeld produced comic?
Yes, I created Dogbaby for Maxim UK - It was about a man who reads that men with a dog or a baby are seen to be more attractive to women. So in my strip the man goes to his basement and creates Dogbaby - a dog with a baby head. I also did a strip called "the honest magician," where the magician saws a woman in half. She dies, but he did say he wasn't kidding. I also draw for Red Eye. I draw unicorns, Wilford Brimley, and Fluffy McNutter, a cat/dog hybrid. I can draw you right now. Let me get my pad. Lie down on the rug. I'll get another bottle.

You've had many comedians on your program and have a flair for comedy yourself. Have you ever had any experience in performing live comedy, aspirations to perform live comedy, or involvement with a strictly humor-based magazine?
You mean, like the Nation? By the way - what do you think of my new shorts? I'm kidding. It's body paint.

What would you cite as the reason for The ½ Hour News Hour's cancellation and what was your personal opinion of the program?
I never watched it because it was on Sunday, and it's a rule: no TV on the weekends - and not just for me, but for my children. And by children, I mean my pet water moccasins, Anderson and Cooper.

But let's stop for a moment and direct readers to reviews of Red Eye. This is from the most leftwing paper in the universe, The Guardian . In it, Redeye is described as the most refreshing show on American TV, and that includes Too Close For Comfort. Speaking of which - why are you sitting so far away? We also got a lovely write up in Slate, and also from the New York Times. Hey, don't get up. Whoa, you almost fell there! That's just low blood sugar, I swear. Trust me, I used to edit Men's Health.

In past interviews, in your blog on The Huffington Post, and on your program you've often mentioned the benefits of cannibalism. What problems, past, future, and present, do you think could be solved with a more cannibalistic approach?
I am "consumed" by the notion that one can explain any cultural practice purely in nonjudgmental terms. I see people do it all the time - from advocating slavery to liking Josh Groban. For anyone under the age of 30, absolute truth has lost to relativism - and now it's entirely inappropriate to judge any behavior, unless you yourself have done it at least three times.

You work out don't you? The best thing for your workouts? Sports massage. I have a table.

Of all the stories you've covered in Red Eye, which did you find to be the most memorable?
I remember guests. Having Johnny Rotten on for the whole hour. Sitting next to Jim Norton, Patrick Warburton - otherwise known as Putty. He's a big fella with hands the size of big hands... Oh, the sushi's arrived.

Red Eye is known for operating with a limited budget, but if the show's budget were increased how would you use the money?
A mariachi band that hovers in the background. Every now and then the band would approach the table and start playing, and I would shoo it away, probably by handing them a dollar. This would go on throughout the show, until one member is randomly poisoned. I'm only kidding. You're sweating a lot. Perhaps you should lie down...I'll get you my shorty robe.

As former editor of Stuff and Maxim UK, how do you respond to criticisms that such publications contribute to the objectification of women?
I don't defend Stuff. I just do it. If you like it - good. If you don't, read Details. I am a big fan of their "how to tie a tie" section, but always wonder why they keep illustrating it on men's wrists.

You lived in London for a bit while editing Maxim UK. How would you compare and contrast London and New York?
Back when I lived there, you could smoke everywhere. It's changed since then, and that angers me. There is nothing more relaxing than a pub at 3 in the afternoon, smoking. In New York , people are chasing a party, and I'm too out of shape for that. See how much more comfortable you are in bed? That's not a bloodstain on the carpet, in case you're wondering.

What's your strangest "Only in New York " moment?
It happened on the D train, it was dark, and I don't want to talk about it.

Which New Yorker do you most admire?
You. I think I'm sure you were warned by other reporters. Whatever happened here, happened because THEY wanted it to happen. I was just a facilitator. These questions are beginning to irritate me. I'm going on Craig's List.

Given the opportunity, how would you change New York?
Repeal the smoking ban. Make it okay to shoot rats.

Eliminate the area from 49th and 48th street on eighth avenue because it smells like pee. The Village voice must change its name to "Whores in back," with the tagline "that's how we stay in business." I also would make it mandatory for tourists to administer sexual favors if they intend to stand in one place longer for 45 seconds to chat. Look, enough with the questions. It's getting late. Do you want to do this or not?

Under what circumstances would you leave New York?
If I were asked to leave, that would be cool. "Hey greg, we're asking you to leave." I would go. Start a petition. Look, if we're just going to sit there, you don't mind if I do this.... while we talk?

What do you consider to be the perfect day of recreation in New York?
I own a van.

Outside of the show and your blogging, what are some projects that you're involved in or contemplating?
I don't blog, I "Glog." Which is Greg blogging . I am contemplating another book, a big one. Like the Bible, but with more staying power.