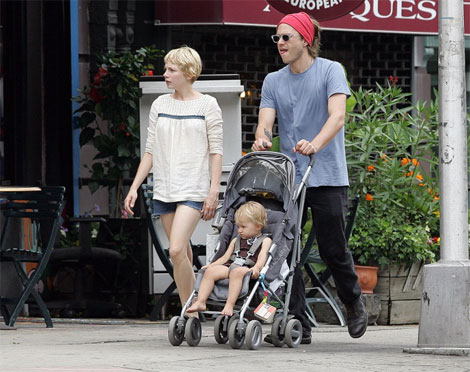 After years of what seemed like coupled bliss, Heath Ledger proved he could quit someone as he and Michelle Williams have officially split. Sources told People Magazine that "It was rocky for awhile. They did what they could to make it work."

Though it was rumored they tied the knot earlier this year in a small ceremony, the two never wore wedding bands and have refused to comment upon whether or not they are married. For now it seems like the Brooklynites have broken their bond amicably -- good news since the two have a daughter, Matilda (born while they were promoting Brokeback Mountain).

What does this mean for Brooklyn's favorite couple: will Ledger still speak in opposition of the Atlantic Yards project? Who will keep the $3.5 million brownstone on Hoyt Street in Boerum Hill? What kind of precedent will this set for other New Victorians?!

Photo of the family in Brooklyn in July 2007 via Flynet.