<em>Mad Men</em> Is Filming: What Clues Are In These Photos? 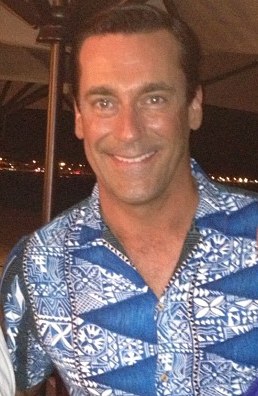 Some photos of Jon Hamm and Jessica Paré filming season 6 of Mad Men have popped up, and since the show isn't returning until next year sometime, we're digging through them for some clues. You can see the photos here—in them, you'll notice a few things:

THE BOOK:In previous seasons, Don has been spotted reading Meditations in an Emergency by Frank O’Hara; Odds Against by Dick Francis; The Chrysanthemum and the Sword by Ruth Benedict; Exodus by Leon Uris; The Best of Everything by Rona Jaffe; The Fixer by Bernard Malamud; and The Spy Who Came In From The Cold by John Le Carré. In these new photos he's seen reading Dante's Inferno on the beach in Hawaii. Specifically, he's reading a paperback version of John Ciardi's translation—first published in 1954, and was in paperback by 1964. This means Draper, next to his bikini-clad wife sipping on a fruity cocktail, is reading lines like:

THE YEAR: Let's try to nail down what year were going to be meeting back up with the Drapers in. The last season ended in 1967, and previously Matthew Weiner has flat out declared that the entire series will end (most likely with season 7) with an old Don Draper (possibly in present time, in his 80s). That means between the premiere of season 6, and the finale of season 7, Weiner has about 50 years to play with. As for now, we'll still be nestled in nostalgia, as Megan and Don are sporting late 1960s attire in these new shots.

THE VIBE: So what's going on with the Drapers? The final scene of season 5 showed Don leaving Megan at a commercial shoot he landed for her, and sitting at a bar alone, when a younger woman approaches him to ask if he's alone, as Nancy Sinatra's "You Only Live Twice" plays:

Some may say that Hawaii is where couples go when they're trying to save their marriage, and that things aren't going so well if you're day drinking on the beach as your husband reads Dante's Inferno! But, maybe that's just how the Draper's roll.

Now, whose wedding is Don observing in those final photos from the shoot?