Celeste Holm, who performed on Broadway and later won an Oscar for her role in Gentleman's Agreement, died in her Central Park West apartment today. She was 95. Her niece said, "She passed peacefully in her home in her own bed with her husband and friends and family nearby... I think she wanted to be here, in her home, among her things, with people who loved her." 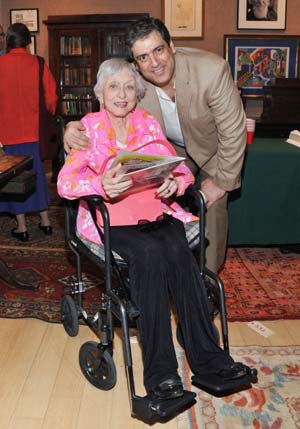 Holm was born in New York in 1919, and studied ballet before going on stage. According to the AP, "Her first Broadway success came in 1939 in the cast of William Saroyan's The Time of Your Life. But it was her creation of the role of man-crazy Ado Annie Carnes in the Richard Rodgers and Oscar Hammerstein musical Oklahoma! in 1943 that really impressed the critics. She only auditioned for the role because of World War II, she said years later. 'There was a need for entertainers in army camps and hospitals. The only way you could do that was if you were singing in something.' Holm was hired by La Vie Parisienne, and later by the Persian Room at the Plaza Hotel to sing to their late-night supper club audiences after the Oklahoma! curtain fell."

She went to Hollywood, with success in 1947's Gentlemen's Agreement, All About Eve (as Bette Davis/Margo Channing's friend), and High Society, and had a long and varied career. But she said, "Oscar Hammerstein told me: 'You won't like it'... [Hollywood] was just too artificial. The values are entirely different. That balmy climate is so deceptive," and came back to New York to do television.

More recently, she—and her 49-year-old husband—was embroiled in a legal battle with her family over her money and she was hospitalized for dehydration after a lint dryer fire in Robert DeNiro's apartment (they live in the same building). Her sons were not present when she died.

Here's a delicious clip of Holm in Champagne for Caesar, plus a trailer for Gentleman's Agreement: