The American Museum of Natural History has finally settled on a "conceptual" design for its planned expansion, and its president raved about the plans in both a statement and in a letter to museum members. Emphasizing that the $325 million Gilder Center expansion "will connect, for the first time, several of the Museum’s existing galleries," President Ellen Futter said, "Jeanne Gang's thrilling design facilitates a new kind of fluid, cross-disciplinary journey through the natural world while respecting the Museum's park setting."

The museum, situated on the Upper West Side at Central Park West and West 79th Street, is surrounded by 17-plus acres of Theodore Roosevelt Park. The AMNH has been planning an expansion to coincide with its 150th anniversary in 2019. It is one of the largest museums in the world, as well as a research and education facility, with scientists discovering that fossils in Texas are actually from a 300 million year old "supershark"—or explaining what are or aren't bed bugs to us.

According to its press release about the expansion, the museum explains,"At a time of urgent need for better public understanding of science and for greater access to science education, the Gilder Center will offer visitors, including the general public and school groups, new ways to learn about science and to share in the excitement of discovery. To ensure that the next generation has the skills and imagination for scientific innovation, the Gilder Center will provide interdisciplinary learning spaces that place STEM (science, technology, engineering, and math) and other educational experiences in the context of world-class scientific research and collections."

The NY Times' Robin Pobegrin opines that the design, by Jeanne Gang, "evokes Frank Gehry’s museum in Bilbao, Spain, in its undulating exterior and Turkey’s underground city of Cappadocia in its cavelike interior." The museum explains, "[Gang] saw an opportunity to reclaim the physical heart of the Museum and to complete connections between and among existing Museum galleries and new space, leading to a conceptual design that includes links to 10 Museum buildings through 30 connections." 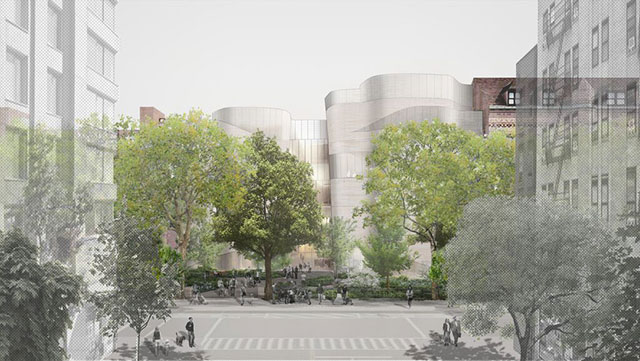 What the expansion will look like from West 79th Street, looking towards Columbus Avenue (Courtesy of Studio Gang Architects)

“We uncovered a way to vastly improve visitor circulation and Museum functionality, while tapping into the desire for exploration and discovery that are emblematic of science and also part of being human,” said Gang, in the museum's release. “Upon entering the space, natural daylight from above and sightlines to various activities inside invite movement through the Central Exhibition Hall on a journey towards deeper understanding. The architectural design grew out of the Museum’s mission."

Renderings show that besides the natural, cave-like interior walls and bridges (which will be load-bearing), the design will expand into Theddy Roosevelt Park at West 79th Street. The museum notes, "Approximately 80 percent of the 218,000-square-foot project will be located within the area currently occupied by the Museum, creating vital connections throughout the complex. Three existing buildings within the Museum complex will be removed to minimize the impact on land that is now open space in Theodore Roosevelt Park to about 11,600 square feet (approximately a quarter acre)."

A group, called Defenders of Teddy Roosevelt Park, has strongly opposed the AMNH's expansion in the green space. But Manhattan Borough President Gale Brewer told the Times, "They heard that we want as little of the park as possible to be the footprint," and seemed pleased that the new structure will be the same height as the surrounding museum.

However, the Teddy Roosevelt Park advocates are not happy, and released this statement:

The American Museum of Natural History has finally presented the design for its proposed massive expansion into Theodore Roosevelt Park at 79th Street. While the plan would take less parkland than originally indicated by the museum, the extensive loss of green space and mature trees - along with other important issues - is still cause for deep concern
We certainly will examine the AMNH plan carefully. However, we have opposed any loss of parkland and trees because the endangered site is such a precious community gathering place. We also are concerned about the added congestion in a crowded neighborhood, the impact on the environment and the precedent of taking parkland for museum purposes. Where will that end?

For those who know the park well, the expansion will cut into the area where the New York Times Capsule, designed by Santiago Calatrava, sits.

The museum hopes to win approval from the Landmarks Commission for the design, which would allow it to begin construction in 2017 and complete it by 2020.